Argos uses screen space across the metaverse as part of its strategy to drive interest and awareness of high-end products and technology brands.

The dual world campaign also appeared on the triple screen of Ocean’s Holland Park Roundabout in London alongside an NFT replica of the same billboard inside Somnium Space VR Metaverse and takes place in road locations across the real world in Birmingham and Manchester until October 23.

Argos Campaign Director, Becky Desert, said: “This campaign is part of a strategy to re-evaluate Argos where we hope to drive interest and awareness of higher end products and brands for which some people don’t think of Argos.

“Part of changing the minds of buyers depends on what we say, but it’s also important that we present ourselves in new, interesting and relevant contexts. That’s why we jumped at the chance to appear in the metaverse, especially for this Desirable Tech-centric campaign.

Each of the screens occupy key locations within the Somnium Space platforms to provide maximum engagement and reach in high-traffic and immersive areas like a conference center, GenesisVR Disco Club, concert hall, and gaming areas most popular metaverses. 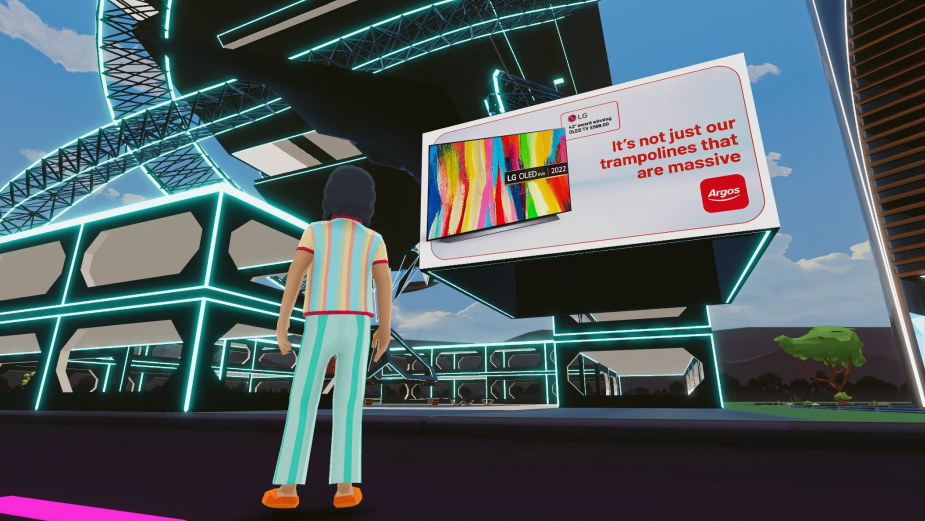 The areas include Decentral Games, the busiest area in Decentraland, accounting for over 60% of all traffic. People visiting these areas will play games between two and three hours a day, with more than 60% of them being return visitors. Ad placements are all natively integrated into locations, allowing both brand advertising spots and the “teleportation” of visitors to the advertiser’s locations.

Director of Ocean Labs, Catherine Morgan, said, “The launch of Ocean’s Metaverse Network provides brands with the ability to create dual global campaigns, giving access to tech-savvy young early adopters on our real-world DOOH network. and in the virtual domain.

“For brands, we’re creating an easy access point to the metaverse where they can test and learn without having to invest in buying land.”

This is a historic moment for the Metaverse, as LandVault technology unlocks a new business model for creators: advertising. Until now, creators of virtual experiences have relied on complex NFT sales or brand partnerships reserved for top creators. With the offer powered by LandVault and Ocean, each creator can monetize their content in an automated way; and brands can now expand their reach in the growing Web 3 metaverse.

Landvault CEO Sam Huber said, “The Metaverse is estimated to be a $1 trillion opportunity over the next decade, becoming a more immersive version of the internet. It’s imperative that brands jump in early and learn the ropes of this new channel so they don’t get left behind and benefit from being an early adopter. LandVault’s programmatic infrastructure enables brands to target audiences in these new environments using tools they know and understand. »

“This is a truly unique moment for the Metaverse, as it offers the first-ever opportunity for audiences to connect with brands and physical objects in an immersive, cross-reality way. Additionally, the owners of these NFT billboards will earn direct revenue from these campaigns, allowing them to reinvest some of the profits directly into generating more content and hosting better and bigger events on their sites, thus generating more visibility for the brands,” said Artur Sychov, founder and CEO of Espace Somnium.

Can you name the main cybersecurity risks for banks and investments? Most would likely list cyberattacks such as phishing, credential theft, DDoS attacks, and possibly ransomware. But would you be surprised to learn that there’s something on the list that many in the banking and investment industry overlook: client-side cybersecurity threats. You know the kind… […]

The Snapchat mobile app is now available on the web John Koetsier The social communication, creative and entertainment app Snapchat is now available on the Web. This is an important and fascinating mobile-to-web reverse migration that could help the company kick-start its growth and expand its impact. At least, theoretically. While snapchat.com is up and […]

RUMOR: ‘Madame Web’ will be a prequel to ‘Spider-Man’

Since its first announcement, Sony Madame Web has been wrapped in, well, a web of mystery. Recently leaked set photos made it even harder to decipher the film, especially since they appeared to allude to Dakota Johnson playing an entirely different version of the classic character. But a new report from The cosmic circus could […]