In most market environments, a company with one of the lowest valuations on the Nasdaq 100 index, a strong balance sheet, and average sales growth of 34% per year would be an obvious buy. In the case of Meta Platforms Inc., it’s not so obvious.

Since Mark Zuckerberg announced a name change and overhaul of the Facebook owner’s strategy a year ago, the stock has erased more than half of the gain it had posted since its listing. on the stock market ten years ago. It cost Meta $600 billion in market value and a place in the elite club of America’s 10 largest corporations.

Analysts predict Meta’s revenue will plummet this year for the first time ever, as competition and cooling economies, among other factors, reduce ad sales. User growth for its flagship Facebook product has slowed as a younger generation flocks to newer sites like TikTok. Meanwhile, the company is spending billions to realize Zuckerberg’s vision of the metaverse, that yet-to-be-realized virtual world where people will work, shop and socialize.

“There are so many red flags relating to Meta,” said Matthew Kanterman, research director at Ball Metaverse Research Partners.

Which brings us back to where Meta is an obvious buy. So-called value investors, who like stocks that are largely overlooked, have already started taking positions in the company this year. They may find it even more attractive now that it’s priced at just 10 times forward earnings, compared to an average of 28 over the past decade and cheaper than dotcom-era tech favorites such as Intel Corp. and Cisco Systems Inc.

And Zuckerberg said last month that the company would freeze hiring and restructure some teams to cut expenses and realign priorities, an acknowledgment that its days as a growth darling are over.

Still, Meta is one for the brave in a world where tech stocks face an uphill battle of rising interest rates. The stock has fallen 61% in 2022, nearly double the decline of the Nasdaq 100, dropping its market value to around $350 billion from more than $1 trillion at its peak last year.

Technical table of the day 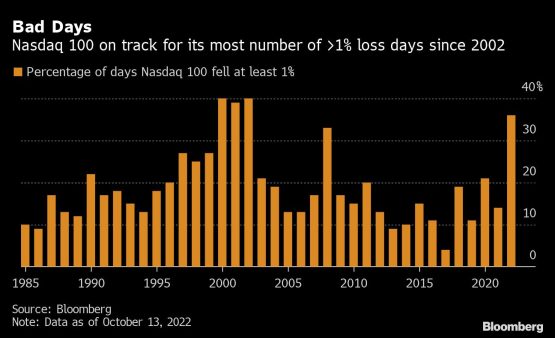 Thursday’s meteoric rebound aside, it hasn’t been a good year for tech stocks, with the Nasdaq 100 finishing at least 1% lower in about a third of trading sessions. That puts the tech gauge on track for the most days with at least a 1% decline since 2002. The Nasdaq 100 rose 1% on Friday.

Elon Musk wants Twitter to be a “multipurpose app”. What is that?

Earlier this month, Elon Musk tweeted that “the purchase of Twitter is an accelerator for the creation of X, the universal application”. Eh? It’s clear that Musk, who became the new owner of Twitter on Friday, is looking for ways to recoup his $44 billion investment. Many observers expect it to quickly introduce subscription features, […]

Sales of non-fungible tokens are stabilizing after a steep decline earlier this year, as a handful of new products and initiatives reignite enthusiasm for a market that lives and dies on hype. NFT’s weekly sales volume is still about half of what it was in January, when there was a blitz of major sales and […]

What books are on your nightstand? “Memphis,” by Tara M. Stringfellow, “Good Mothers’ School,” by Jessamine Chan, and “All the Flowers Kneel,” by Paul Tran. What’s the last great book you read? “The Love Songs of WEB Du Bois”, by Honorée Fanonne Jeffers. Oh my God, that blew my mind. It was devastating, but I […]